PART ONE Here
Adam and his team are a fictional snow plowing company, but many of the experiences, problems, snow plow solutions, and, yes, headaches are real. Who knows, if you read between the lines, you might get a glimpse of how the KAGE® skid steer plow system was born!

Truck Plow Down – Repair Or Scrap?

“Adam, my plow fell off!” were the words that are forever burned into Adam’s memory. Adam is the owner / operator of an 8 employee company that provides landscape and snow removal services in the metro. That entire night and the events that transpired were what inspired the mural tattooed on Adams shoulder, and was what set the stage for Adam’s success. Tonight he learns perseverance.

“What do you mean your plow fell off?” demanded Adam. “The plow came off the truck and it’s in the pile of snow at the curb!” screeched an excited Logan. “I was coming around the corner by the loading dock, hit an island and the plow flew off and spun a 180 in front of me!” Adam was floored. He goes through the scenario that Logan is describing, and in a split second he imagines the mistake that Logan made.

Instead of trimming around the building first, and doing the delicate touch-ups to expose hidden obstacles first, Logan must have tried to hog the main part of the lot first. Came full speed around the corner and caught the island. Logan knew better, and just as Adam was about to rebuke Logan, he caught himself. That wouldn’t do any good at this point. Right now there was just one thing to do, and that was to get the plow back on the truck and fixed.

“Logan, wasn’t there a stake on that island?” This seemed like a much softer rebuke than what first came to mind. “No, it must’ve gotten pulled out by the kids at that nearby townhome.” Said Logan with a sneer. “Suckers better quit doin’ that crap or…..” His voice trailed off as he remembered the recent conversation that he and Adam had about his professional conduct, temper, swearing etc. “…. you know what I mean”. “Yeah, well right now we have to get that plow back on. Is it broken?” Asks Adam matter-of-factly.

Logan jumps out of the cab of the 1 ton pickup to inspect the mount and plow frame. The frame of the v blade plow is setting on the ground, tipped back because the plow is not Vee’d back to support it. The left side of the V is touching the curb, while the passenger side of the V is angled back, and at first glance seems to be hitting the light rack. Something wrong there. Moving back over to the truck mount Logan can clearly see that something is strained. As Logan slides part way underneath the front of the truck, he adjusts his body so as to allow what minimal light is available from the nearby parking lot light to illuminate the destruction. The top pin holes that hold the plow up are both gone, and the hooks that hold the plow onto the truck are both bent down.

As Logan is describing this to Adam he climbs back into the truck, hands freezing. “Gosh, it’s cold! Well, what do you want me to do?” “Can you get it hooked back up and make it over to the shop?” Asks Adam. “Yes, if I use a wratchet strap I can probably get it tied onto the truck enough to make it there. The lights won’t work ‘cause the plug got ripped out, but I can use the truck headlights.” “OK,” replies Adam. I’ll see you there. Adam flicks off his warning light as he heads back out of the parking lot he was supposed to have plowed by now. Glancing at the time as he leaves he mentally notes ’12:30 am leaving to fix Logan’s plow’ so that he can note that in his timecard later. It’s just a quick drive over to the shop from where he is, but the 6 minute drive seemed like forever. What sort of carnage would he see when Logan got there?

Adam arrived back to the shop, and saw that there were already some mysterious tracks leading into the driveway, and down into the shop. The shop was a small pole shed, heated by kerosene heaters, and half of it was dirt floor. The other half was concrete, and was where he had his small fix-it shop. Adam often wished that he could move his shop to a better location, but this was the only space that the city would allow outside storage. It was that, or Adam would have to move outside of city limits and move away from the sites that he serviced.

Adam thinks to himself – what are these tracks from? Logan couldn’t have gotten back to the shop already. As he drives up to the doors he sees that the shop lights are on and a thin strip of light shines through the center of the large sliding doors. Thoughts are swirling in Adams’ head as he approaches the doors. Who is in the shop, and why?

Fixing The Plow & The Surprise Inside The Shop 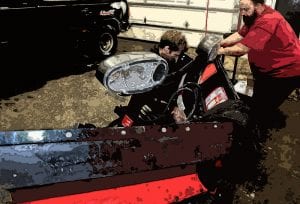 Adam throws open one side of the sliding pole barn doors, and as his eyes adjust to the light, he sees that Chase has his pickup pulled into the shop, half on the dirt, and the other half on the concrete. While Adam is not sure immediately what Chase is doing, he sees that Chase is not doing what he is supposed to. Adam looks around for chase, scanning the 3 walls that he can see from the doorway. The only place left for Chase to be is upstairs in the small lofted break area.

Charging up the stairs, Adam throws open the door and sees Chase sleeping, hunched over in one of the chairs at the table. “Chase!”, Adam says sternly. “Chase!” again. Chase looks up, frantically looking around as if his surroundings were unfamiliar to him. As he comes to, an expression of fear, and regret comes over his face. This expression gives way to an indignant stare as he focuses in on Adam. “What are you doing here?” Adam demands. “Napping” states Chase.

Chase is not Adams’ favorite employee. “Is your rig broken or something?” Adam requests as he digs for some legitimate reason why Chase would be at the shop at all. Maybe if Adam gave Chase a good excuse he could justify not firing him there on the spot. In the split seconds that follow, Adams blood pressure must have been at an all time high, and Chase’s response made it even higher. “No, why do you ask?” Adam could hardly believe his ears. Adams hands are visibly shaking from the adrenaline flowing through his veins, so he quickly slips them into his coat pockets. He can feel his face flush red, and his neck starts to stiffen ready for a fight.

Carefully guarding his response, he says “I need you to get to your site and keep plowing, right away”. “I’m gone!” replies Chase as he barges past and out the door. Adam thinks to himself, wondering if that means Chase just quit, or if that was just his way of saying “OK”. Deep down Adam hopes that he just goes to his sites to get them done, but also knows that Chase’s attitude is poison, and can spread to the other employees.

Snow Plow Cylinder Through The Moldboard

Adam’s encounter with Chase keeps running through his mind as he pulls up the welder and prepares a small area for Logan to pull the broken plow in. Logan pulls up and Adam lets him into the shop. The plow is precariously tied to the front hitch with a couple of w ratchet straps. Visibly leaning to one side and dragging a corner on the ground. The two of them get the plow unstrapped from the truck and lay it on the face so that the hitch is sticking straight up in the air. The first thing that Adam notices is that the passenger side hydraulic ram had completely pushed its mount off the moldboard and was dangling freely from the rear bolt hole. As Adam looked closely at the truck mount, he saw not only was the hitch broken, but the bolts that held it to the frame had been loose, probably for quite some time because the holes were egged out.

How will Adam and his crew recover from this snow event? Will they all keep their cool? Will their customers feel their internal struggles, or will Adam be able to keep it together long enough to pull through and get the job done?

Breakdowns are probably an inevitable part of snow removal, but if you are able to mitigate them and make sure that you have good attitude(s), there is always a way to move ahead! Adam is getting a lesson on perseverance. Stay tuned for what happens next. You already know that in the end Adam and his team build a massive and widely respected snow ONLY business, but the keys to success are in everyday build up to that point.